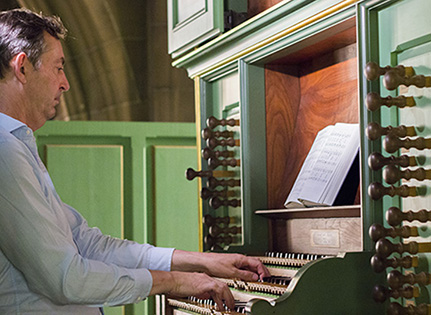 Bruce has been with the University of Toronto (U of T) since 2004.

Bruce plays Knox College’s organ at weddings and sings in a local choir.

I play the organ for weddings in Knox College chapel, and I’ve been singing in the church choir at St. Mary Magdalene in Toronto for five years.

How did you first become interested in organ playing and choral singing?

I took piano lessons as a child. One day the organist at the church my family attended asked my parents if I would like to try the organ. So for a teenager, this was really exciting. The organ is a giant instrument that makes this big sound, and I couldn’t stop playing it! I got a thrill out of making music. For me, it’s about the creativity, because every time you play it’s different, it’s unique.

As for singing in a choir, it’s nice to make music as part of a group. I enjoy hanging out with the singers, and some of them actually work at U of T. We all enjoy this one common pastime of singing the same kind of music.

How did you get involved with Knox College and your church?

I originally played the organ at Knox College for enjoyment. I have a music degree but I wanted to continue taking organ lessons and I had an instructor, Kevin Komisaruk, who is an assistant professor at U of T’s Faculty of Music.

Since I was working at New College, it made sense to have my lessons on campus. So, we met at Knox College and started having occasional lessons. I continued to practice and I started getting more involved there. As a result, the College asked me if I would like to be hired to play the organ for weddings.

As for choral singing, I joined the choir at St. Mary Magdalene because I knew the music director there. I also sometimes play organ for church services there.

What (or who) inspires or influences your choral and organ work?

In terms of composers, it’s Bach. As an organist, Bach is important because he wrote a lot of magnificent organ music. A lot of Bach’s music is difficult to learn but you feel that you have really accomplished something when you can finally play a piece. And of course, it is very enjoyable to play something that is so beautiful. Also, the music is complex on many levels and you always hear something new when you play the same work again; I think that is what makes playing Bach’s music so interesting.

I also think the U of T instructor I mentioned earlier, Kevin Komisaruk, influenced me. He opened up an area of musical interpretation that was unfamiliar to me. Through working with Kevin, I began discovering early French organ music and a style of playing that was, for me, new and exciting. My only regret is that I do not have enough time to practice as much as I would like. Music, like a lot of things, requires a lot of hard work and time and the more time you put into it the more you get out of it.

Another inspiration for me is the choral music at the church of St. Mary Magdalene. There are very few opportunities in Toronto to sing great choral music in the setting for which it was intended, and I think it is in that setting where the music really comes alive. It is exciting to be a part of that.

What is it about musical performance, whether singing or playing an instrument, that captures your interest?

It’s nice to be in a choir and be part of the soundscape that everyone’s contributing to. On the other hand, the organ is an instrument that can fill up a whole room, whether it is loud or quiet, so as an organist, you create your own soundscape. It’s really fun to do that, too.

As an organist, it’s also nice to be part of people’s special days, like a wedding, even if you don’t personally know them.
Music is just notes on paper, and it takes people to bring it to life. So every time you perform a piece of choral music, it’s like a new piece of art. It’s unique to that moment and that time and the people who are performing it. That’s what makes performing interesting and exciting.